1889  September : At Whitehaven, in the English Lake District, Alice launched a ship which carried her own name "Alice A Leigh".   It was a four masted barque owned by  the Alice A Leigh Shipping Co. of Liverpool, and capable of an England-Australia voyage in about 100 days at speeds of up to 330 miles / day. 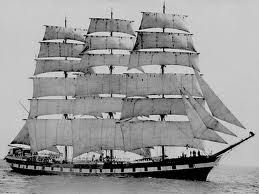 The webmaster sought expert advice over what in this photograph seem to be gun ports.
Apparently the cosmetic 'ports' are painted on as a deterrent to pirates and the like.
What goes round comes round, as the saying goes. The webmaster attended Stockport Technical School
which in its first manifestation was founded by Alice's husband Sir Joseph Leigh.
As was the custom the scholars were tasked with projects for the summer holidays.
Sixty years ago the webmaster's project was to research the decoration of British warships in the 1800s !


After 33 years service her last voyage ended August 1922 in Auckland, New Zealand were she spent the next eight years moored at Northcote Point.  Later a plan to set her up as a breakwater failed when she ran aground at Shipwreck Bay, Moturekareka Island.
She was the last of her kind on the British Register. 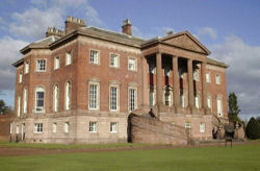 1894  Joseph was knighted, hence the couple were then styled Sir Joseph and Lady Alice [1].


[1] The titles 'Lady' and 'Dame' are defined at Debretts. The latter is, in modern times normally only used on legal documents.  For example 'Dame' in Alice's case is in a solicitors' notice in the London Gazette of 17 July 1928.

http://www.g4fas.net/1889_Alice-A-Leigh_launch_CP_report.html (as linked to above)