Mr. Adamson's notable commercial achievements are legendary and are well covered by other sites across the internet.  In this page, the webmaster after his personal odessey through the archives in pursuit of his own relationship to Mr Adamson, aims to create a new timeline sprinkled with a collection of new and old facts about the life and times of the man.


1820 April 30 Daniel was born in Shildon, probably at the Grey Horse Inn.  His parents were Daniel Adamson (farmer and publican) and Nanny Gibson.   He was the 13th of their 16 children. [1]
1833 April 30 On this day, his 13th birthday he left the Edward Walton Quaker School and four days later began his apprenticeship at the Stockton and Darlington Railway works in Shildon under the wing of Timothy Hackworth.
1845 June 10  Daniel married Mary Pickard at the parish church Aysgarth, in Wensleydale.  "Rank or Profession"  of both of their fathers is recorded as "Farmer".  From various census returns it is clear that Mary was born in Danby Wiske, which is a village near Northallerton. [2]

1846 Q4  Alice Ann his first child was born in Shildon
1850 July 7  Daniel's employer Timothy Hackworth died, and later Hackworth's engine works was sold [6].  So it appears that in anticipation of major changes in Shildon Daniel decided to to spread his wings, and having risen to the level of general manager at the engine works he removed to Stockport to take up the post of manager of Heaton Foundry which was on the corner of Gordon Street, Lancashire Hill, Stockport.

1851 Jan 24  Lavinia his second child was born at 1 Appleton's Terrace [aka Appleton Court], Nicholson Street, off Lancashire Hill Stockport. [2] The house was a very modest abode, probably what is known as a two-up-and-two-down with a steep embankment at the end of the back-yard. Now [2010] Nicholson Street has been cleared of the Victorian properties but the cobbled street is still there.  On the crest of the embankment there now stands Pendlebury Hall, originally an ophanage; later Stockport Technical School coincidentally the webmaster's alma mater; and now, today the place is a Care Home for the elderly.

1852  In the spring Daniel moved to Ashton, Cheshire to set-up as an iron-master on his own account.  The works, his first, became the Newton Moor Iron Works and was north-east of the junction of Talbot Road and Ashton Road, Dukinfied, Cheshire.

1861 In the Census and aged 41 he is described as an engineer employing "128 men and boys"; and "2 farm-men".  Residence believed to have been Goodier House, Back Lane, Newton, Hyde [7].  Present were his wife Mary, and daughters Alice-Ann and Lavinia.

1871 In the Census Daniel is described as a Civil and Mechanical Engineer "employing 250 workmen at Newton Moor Iron Works".

1874 Due to lack of space he re-established his business on a new site about a quarter mile to the north, at Johnsonbrook Rd.

The area of the site was about four acres and well served by the railway. 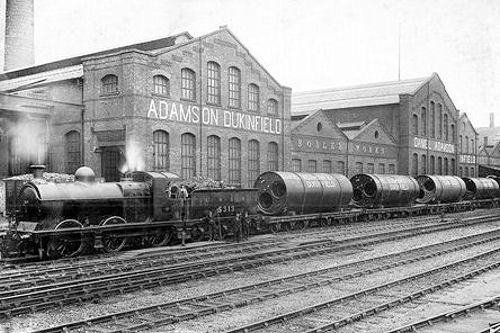 Reference only, for the railway buffs :
The locomotive leading this train looks like an L.N.E.R.  Robinson J11 .


The Company's headed notepaper c.1890 carries many clues to the multiple activities of the business,  i.e Nearest Passenger Station, Hyde Junction;  London Office, Queen Anne's Chambers, Broadway Westminster;  Manchester Exchange, No. 21 Pillar Tuesdays and Fridays  from 2 to 3 o'clock;  Manufacturers of Steam Boilers----all types and sizes;  Absorber and Flange-seam Flues;  Steam and Vacuum Dryers;  Vacuum Pans;  Pontoons;  All classes of rivetted and constructional ironwork;  Sole makers of Wheelock Patent Automatic expansion gear applicable to all types of engines; Electric light and traction (high speed and low speed);  Blowing, rolling, compressing, reversing [?];  Complete steel works plant;  Condensing plants;  Cooling Towers; Brick chimneys and boiler settings a speciality;  General contractors; Pipe plants; Sewage ejectors;  Goods to Adamson's sidings, Hyde junction, Great Central Railway.
1882 June 27  Daniel, at his home The Towers, Didsbury [link], was host of 76 influential guests, including some of the wealthiest and shrewest men in Manchester.  It was the historic occasion upon which the decision to go ahead with the Ship Canal was made.

1885 August 8 a Saturday.  Following the passing of the Ship Canal Act, Daniel the chief promoter of the Bill returned from Parliament to Didsbury.  The reception he received from the people of Stockport and Didsbury is the stuff of legends. (see an account of this event here)   My grandmother told me in the 1940s that aged 9 she was a guest at The Towers on that day, and I guess, probably in the company of her own grandmother Elizabeth Dent , who was Daniel's sister.


1885 October at the Free Trade Hall, Manchester, Mr Adamson 'holding forth' on the subject of The Ship Canal. 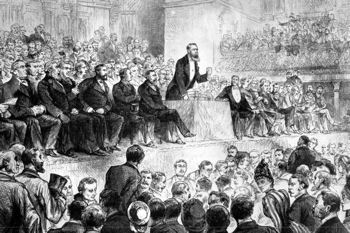 Grave of Daniel Adamson, in Southern Cemetery, Manchester
The white memorial to the left, stands over the grave of Sir John Alcock, aviator.


1894 May 21  The Manchester Ship Canal was opened by Queen Victoria.

The following was composed by The Manchester Literary and Philosophical Society for
inclusion in the Annual Report of Manchester City Council of 1890.

Mr. Adamson died on January 13th, 1890, after a lingering illness at his residence, The Towers, Didsbury, near Manchester. [2]

End of this Obituary

Sources
[1]  "Daniel Adamson, Shildon, 1778 - 1832" by Frank Hutchinson, at Shildon Library. This slim pamplet of 16-A5 sides, describes the nest into which the young Daniel was born
[2]  U.K., BMD copy certificates in possession of the webmaster.
[3]  Baptisms at the parish church of Newton in Longdendale, in the County of Chester.
[4]  Obituaries discovered by Mrs Ivy Dolan, a descendant of one of Mr Adamson's sisters.
[5]  Grave memorial photo credit
[6]  In Robert Young's book, below.  See "Foreward to the 1975 edition".
[7]  Residence in 1861 gleaned from the Census. The assumption of 'Goodier House' gleaned from http://hydonian.blogspot.co.uk/2012/04/goodier-house-victoria-street.html


Further reading / URL linking :
Daniel Adamson web page at Wikipedia
MANCHESTER'S  SHIP  CANAL - THE  BIG  DITCH, by Cyril J Wood
TIMOTHY  HACKWORTH - AND THE LOCOMOTIVE, by Robert Young (Many references to the Adamsons of Shildon)
A CRUISE ALONG THE MANCHESTER SHIP CANAL, by Colin Wilkinson.  ISBN 9781904438922


General Notes
a) The town of Hyde had the benefit of another firm of boilermakers.  Joseph Adamson & Co. Ltd.  The proprieter J.A. also grew up in Shildon and was the son of Daniel's elder brother John, an N.E.R. engine driver.  Joseph's son Dr. Daniel Adamson, became a President of the Institute of Mechanical Engineers.

The Salford Lowry Centre on the Manchester Ship Canal 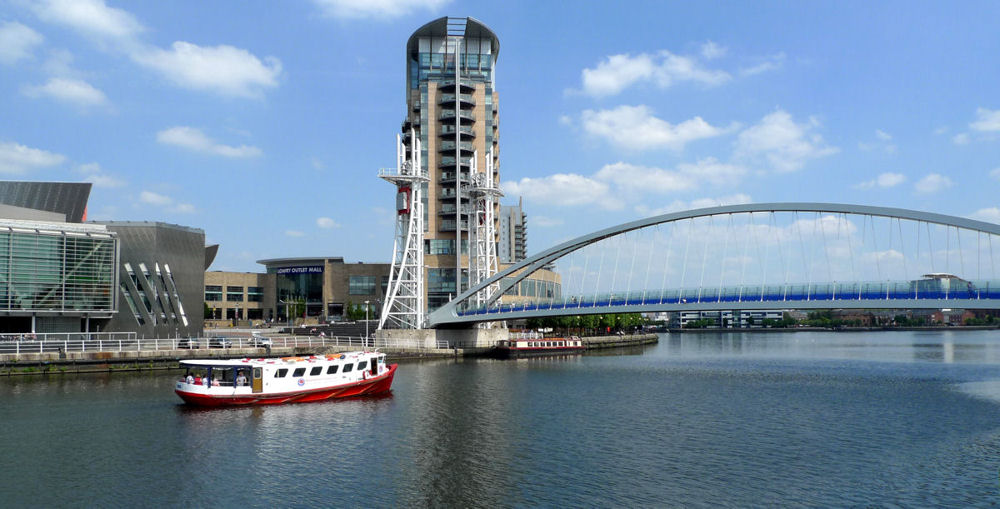