1883 Aug 17 Following his death, the "Eccles and Patricroft Journal" published the following article.
Death of Mr. David Tidswell
Our obituary record contains the announcement of the decease of Mr. D. Tidswell who died suddenly, on Thursday, on board a Southport steamer.  The deceased was a handloom weaver, and had resided in Eccles for over 40 years; and for 21 years was keeper at the Congregational Church, the congregation pensioning him off some two years ago.
He was an ardent temperance reformer; an active worker in the Free Trade movement, and for one moving in a humble sphere of life was respected by his fellow men.

1883 Aug 18 The "Southport Visitor" published the following article.
A very sudden death occurred at Southport on Thursday morning. An old man named David Tidswell, a pensioned chapel keeper belonging to Eccles, who had come over to Southport for a few days, went down to the Pier for the purpose of going to Blackpool; and had only got a few yards from the pier on board 'The Queen of the Bay' before he went into an apoplectic fit and died almost immediately. The steamer was put back and the deceased man was landed and taken to the 'Victoria Hotel' where he was seen by Dr. McNichol who certified the death resulted from apoplexy.


2012 "The Victoria Hotel" is still there on the promenade almost facing the Marine Parade which leads to the Pier.

The Queen of the Bay


1883 Sep 28 The "Eccles and Patricroft Journal" published minutes of a meeting of the admirers of Mr. D. Tidswell at The British Workman Eccles to consider the desirability of erecting a tombstone in Eccles churchyard over his remains.
The following is one statement out of many and is extracted from the minutes; "Mr GEORGE MOYSE proposed that a monumental tombstone be erected in Eccles churchyard and if the funds permitted that a marble bust of the deceased be obtained for erection in a conspicuous place in Eccles Town Hall (Hear,hear)."

St. Mary's churchyard, Eccles, Lancashire
The memorial may have been moved to its present position when the graveyard was landscaped,
a process which disposed of most of the other gravestones
. 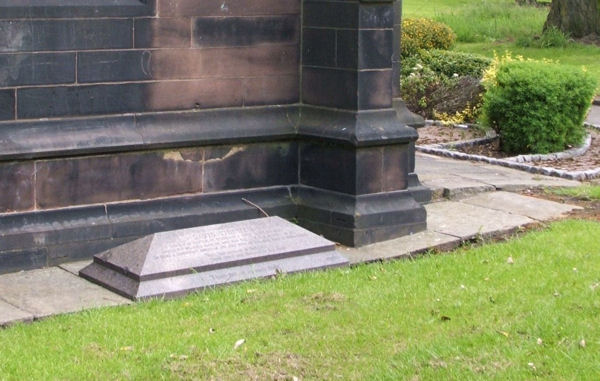 The memorial is inscribed as following :

In Memory of DAVID  TIDSWELL

Humble in station he exercised a great power for good among the working classes,
and won the love and respect of all.
He lived a consistent Christian life and died in the sure hope of immortality.


Of the other remaining memorials there is that of Robert Stephenson a brother of George Stephenson railway engineer.
(The Manchester-Liverpool track which was laid by George Stephenson is 150 yards north of the church.)
THE  PETERLOO  MASSACRE (and the Free Trade movement)
"On 16th August 1819 in St Peter's Fields, Manchester, armed cavalry charged a peaceful crowd of around 60,000 people gathered
to listen to anti-poverty and pro-democracy speakers. It is estimated that 18 were killed, and over 700 seriously injured." The quotation above is from the following website : http://peterloomassacre.org/index.html

Was David Tidswell a son of the Peterloo Massacre ?
It is almost certain that he wasn't there as he was still living in Macclesfield at the time, and only 8 years old,
in fact his first child Sarah was born in Macclesfield in 1831 nearly 12 years after Peterloo.
However his move to Eccles was what brought him into contact with the Free Trade movement.

Coincidentally, when David died at Southport on 16th Aug 1883 it was the day of the 64th anniversary of the Peterloo Massacre.
Perhaps the 16th of August had been set aside as an annual remembrance day, and in 1883 had his church arranged a day trip to Southport ? More of David's ancestors and relations may be seen here. [link]