1935 July 28  Was born in the home of my maternal grandmother at 25 Bosworth St, Openshaw, Manchester [M11 3AW] she delivered the baby and nipped out for ice creams etc. The house was demolished in 2009 as part of a redevelopment.
1935 Our family home in those days was at 35 St. Margaret's Avenue, Burnage, Manchester [M19 1EL]
1935 August 18  I was baptised in the parish of St Margaret, Burnage in the diocese of Manchester.
Godparents were Harry Royle, Dorothy Royle and Sydney Royle (my Dad).

1936 The family moved to 21 Broadstone Rd, Stockport, to take over a Hydes beer-shop, the Long Pull, previously managed by paternal grandfather until his death. My grandfather's funeral happened to be on my 1st birthday.
1939 March 3 My brother Barrie was born. (Died Capetown 12 August 2009)
1939 - 1945 WW2, and my Dad was called to serve in the R.A.F.
1940 September.  This was the time of The Battle of Britain, and also Geoff's first days in school at Longford Road, Reddish, Stockport. There were air-raid drills, and gas-masks for children and staff from day-one !  Apparently diving under the desks would have protected us from the bombers.
------
1944 Friday (evening) February 18 : Aged 8, my first choir-practice at St.Elisabeth's church, Reddish. Mr.Wright was the organist and choir-master.
1944 Saturday February 19 : My first pianoforte lesson with Harold English. He was the assistant organist at St.Elisabeth's and an old friend of my Dad.
1944 May 29 : It was Whit-Monday and the day of the annual St.Elisabeth's choir picnic, quite a novelty for an eight year old to be out and about with 'strangers'. The venues of those picnics were never the same and might have been anywhere within 50 miles of Reddish. I do remember Southport; Blackpool and Llandudno but this first one has suddenly become signficant as the venue Belle Vue Zoo and Funfair was swarming with U.S. Army G.I.s. Those G.I.s could not have known that D-Day was only 8 days away. And the primitive historian in me suspects that for reasons of secrecy and security, many, many foreign troops were billeted well away from England's south coast until the eleventh hour.
1944 Tuesday June 6 : D-DAY
1945 Tuesday May 8 : VE day (Victory in Europe) i.e. D-Day to Victory was 48 weeks.
------
1945 September 27 Dad was released from the R.A.F. to continue family life with Dora, Geoff and Barrie.
1945  This line is reserved for my first bike (crate, grid-iron, ger-off-and-milk-it etc etc). A diety named Hercules had something to do with its invention.
1946/spring Due to a fall on broken glass while playing, I suffered a serious injury to my writing-hand.  An artery and tendons  were severed. I wish I could go back in time to Stockport Infirmary and thank those good people who eventually repaired the damage. I remember I was treated at the time with M&B antibacterial tablets, forerunners of what we now recognise as antibiotics which were a godsend for war wounded.
1948  My brother Philip was born.
1949 - 1952 Attended Stockport Technical School as an "engineer". Students chose to specialise either as builders or engineers and were streamed accordingly
1950 August My first ever commercial flight as a passenger in a 'plane.  Link
1951 June A 'foreign' customer came into our 'Long Pull' off-licence in Reddish and regaled us with his ambitions and what seemed like tall stories. He was a Rhodesian and a professional motorcycle racer.  Little did any of us know then that our caller would actually go on win the I.O.M. T.T. Junior and Senior races in 1953. To read more about this; and my own Bikes with Engines please follow the link.
1952 Aug 30 (Saturday) First flight of the Avro 698 (prototype Vulcan) at Woodford Aerodrome. Among the observers at Flight-Sheds were chief design engineer Mr Stuart Davies and his daughter Susan age 12 (according to Susan).
Then the following day
1952 August 31 (Sunday) "A last minute rush to prepare the new Avro 698 four-jet delta bomber for display at the S.B.A.C. Airshow took the wind out of the North Western Area's sails by causing the postponement of their popular aero-modellers' rally at A.V.Roe's Woodford aerodrome sponsored each year by the "Manchester Daily Dispatch."  The foregoing  quotation is from the Aero Modeller magazine of November 1952, pp. 648-649.
The webmaster was one of the disappointed aero-modellers turned away from the aerodrome's main gate on that Sunday morning.  Also the short notice and urgency of the cancellation were illustrated by the fact that on the previous evening, "- - the BBC added an announcement in their Regional Broadcast - -".

1952 Sep >> 1958 Aug  I was enrolled as an apprentice draughtsman at Craven Brothers (Manchester) Ltd.  link
We built enormous machines for metal cutting/and grinding. My apprenticeship included HNC (Institute of Mech.Eng) at Stockport College  But in those days the closest we got to a degree/cap-and-gown or even formal indenture was advice from the management to "Just tell 'em where you're from lad !"

I was trained to service ground-based radars such as 'beam-approach'
which assisted pilots when about to land, forerunner of ILS.
Those 'gears' were namely : Eureka; Babs; and TACAN.
Coincidentally in WWII my Dad who was an R.A.F. electrician, retro-fitted
the air-born counterpart equipment known as Rebecca.

Digressing for a moment. it pleases me to know that the
'Detection and Location of Aircraft by Radio Methods'
was first considered by the Air Ministry in February 1935,
the year I was born.
[ BOFFIN, p.7, by Robert Hanbury Brown FRS. ISBN: 9781 9101 9317 4 ]

Here is another airman's account of his time at R.A.F. Locking.

1959 May 10  An amusing mishap. Dashing back to R.A.F. Locking around midnight my trusty Norton shed it's exhaust silencer. We were near Gloucester, the night was as black as pitch when the bike suddenly cried out; and in the rear-view mirror I saw a shower of sparks chasing me down the road. I did a u-turn to retreive the the mad-hot hardware and it seemed an age before it was cool enough to stow on the bike.
A part of the silencer, a welded lug had failed, and a few days later a workshop near Locking fixed it for me.

1967 Dec 25  Christmas Day and day number one of my longstanding ambition to design and build an astronomical telescope. As a hobby this interest in astronomy and astronomical instruments lasted for decades, together with forays into amateur radio; weather satellite monitoring; radio astronomy etc. The radio element led to an unexpected social life through my membership of Stockport Radio Society. The club secretary and his peers, largely WW2 veterans made me very welcome and were surprised that I already had a Class A licence (including Morse code). I kept my 'motive' for joining SRS to myself; I had been trained by the R.A.F. to service gears which used thermionic valves and since my time in the R.A.F. such gears had become solid-state, i.e. the needs and logic were basiically the same but a mere fraction of the size and cost.  A real plus was that hardware was much easier to homebrew. Regarding the above 'motive' the club had many bright sparks who were glad to support my self-training in solid-state tech (in pursuit of the knowledge I craved for doing backyard radio-astronomy).  Licensed as Radio Amateur, callsign G4FAS (the G = England, U.K.)
On radio frequencies up to 29.7 MHz (10 metres wavelength) I met many other 'radio-hams' in more than 100 countries, communicating mainly in Morse code.
Those 100 radio contacts were confirmed each way by special postcards which  warranted membership of the (United States) Amateur Radio Relay League, DX CENTURY CLUB, membership no.30,527

Professionally.
1961 - 1993   Employed by the A.V.Roe company, Woodford, Cheshire as a design engineer, stayed there until retirement (age 58).  Was involved in the construction, modification and restoration of many types of aircraft, e.g. Anson [G-AHKX]; Shackleton; (the mighty) Vulcan; 748/ATP; Nimrod; Victor [ex Handley Page]; VC10 [ex Vickers].  Over the years the company name went through a number of transformations. As a design; assembly; and flight test facility, the Woodford site closed on Friday 28th of October 2011.

1990 January 08   By invitation I attended a Special Evening Buffet at St. Mary's Church, Cheadle, Cheshire.
The guest speaker was Astronaut Colonel James Irwin - USA, Lunar Module Pilot on the Apollo 15 Mission to the Moon.
Inevitably it was a very interesting encounter.  Firstly he spoke about his experience as a test-pilot and the Apollo program; and then about his charity work and the way his Apollo experience had heightened his feelings about his Christian faith.
Many of us queued to be introduced to him (hand-shakes and chat) and for a donation to his favourite charity we each received an autographed photo of him standing beside Apollo 15 on the Moon.  He died August 8, in the following year, aged 61. 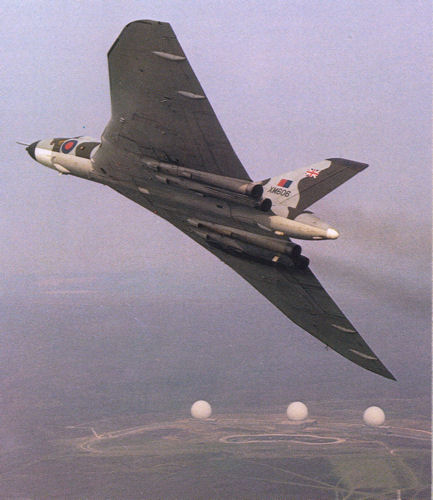 Aside from my familiarity with members of the photographic department
at B.Ae Woodford, a precise citation escapes me. Around that time they
kindly provided other photos for the walls of my office.

Dear reader, this  LINK  will take you to a business webpage which includes
a rare portrait of Stuart Davies CBE, designer of the Avro (698) Vulcan
together with endearing remarks by his grandson.

1996 - 2000   I constructed a radio telescope to detect and record deep-space objects,
e.g.  Cygnus A; M1 the Crab Nebula; M87 Virgo 'A'; and Cassiopeia 'A'.
The project was a wonderland of imagination; history; astronomy; general science;
and handicraft, for me alone perhaps an ideal retirement project.

This chart recording was captured nocturnally during six hours
as radio foghorn 'Cygnus A' slipped steadily westwards.
See visual sky that night, under the Milky Way

A few weeks prior to the above Shawbury event I had retired from B.Ae Woodford on September 30th and it so happened that a farewell tour of Britain by Victor-Tanker XH672 had been arranged for the same day - - - so together with friends and collegues I enjoyed the sight of a very quiet fly-past as the plane skimmed fast and low across the airfield and away - - - it was as though 'someone-up-there’ knew that I was about to clock-out into retirement.

Incidentally, the same Victor XH672 was one of eleven refuelling tankers which enabled the attack by RAF Vulcan XM607 (Flt Lt Withers) on the Argentinian held East Falkland Is.  After the successful bombing run on the airfield at Port Stanley there was the homeward refuelling of the Vulcan by Victor XH672 (Sqn Ldr Barry Neal). 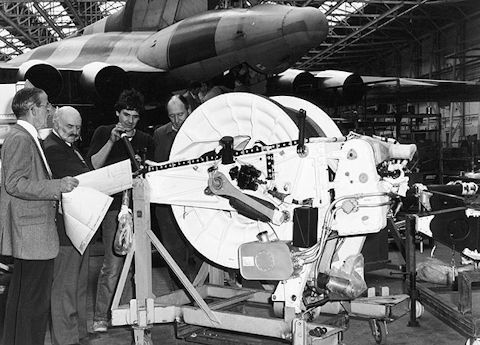 ©  British Aerospace plc 1982
Humphrey (dark jacket) under pressure at Woodford during the Falklands crisis as
he ponders the task of installing a flight-refuelling unit under the tail of a Vulcan.

For more information about Perma.cc please follow the link.