1841 census  Stewart (25) is shown as a 'ship carpenter' living in lodgings in Couper Street, Leith, a maritime village near  Edinburgh, along with other 'ship-builders' and their families.  As a married man he was quite a long way from his wife Jane and daughter Maria who were living in Rose Street, Dundee.   His occupation was a 'journeyman' carpenter, i.e. self-employed and paid by the day.
On the day of the census the space between Stewart and his family included the Firth of Forth and the Firth of Tay, and between those watery obstacles was the Kingdom of Fife.  The 21st century distance by road, with the benefits of bridges etc, is 55 miles, so there would be many more road miles in 1841.  It seems reasonable then to assume that he would be carried by sea to such contracts. 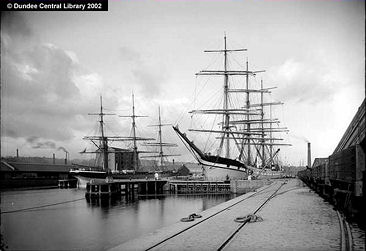 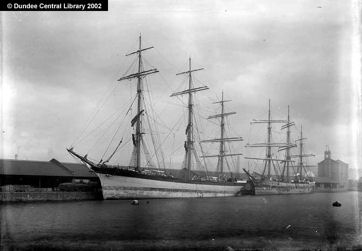 A click on the pictures will take you to the original internet source.
The Alice A Leigh, built at Whitehaven, Cumbria in 1889 was named after the wife of Joseph Leigh who was the Mayor of Stockport.
The images are from a collection of glass-plate photographs bequeathed by Dundee jute mill supervisor Alexander Wilson.
The full archive was found at http://photopolis.dundeecity.gov.uk/

In the name of simplicity, data sources in general are omitted.